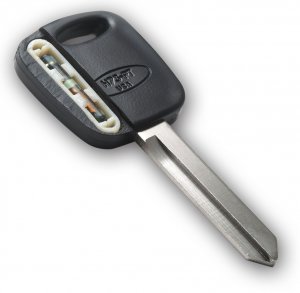 The car keys currently serve more than just opening the car. A Transponder Car Keys usually has a chip (transponder) that allows it to perform different functions. Start the engine, unlock the steering wheel, activate the fuel injection system, open and close the windows and doors, and even activate and customize some functions related to the comfort of the vehicle.

All this is part of a complete security system with coded technology that was born from the need to protect vehicles against theft since, at the end of the 90s, there was an increase in the “pulling” of cars, and the bullous alarms were not very useful as anti-theft protection.

With this new system, Transponder Car Keys became an element of great value that should be taken care of a lot since they have a chip or transponder built into the head. When the key makes contact with the switch, a signal is transmitted between them. “The computer issues the question and the transponder answers with the car code. If there is no response or it is incorrect, the engine will not start.

In this way, a thief cannot start the vehicle since he cannot start it without having the corresponding key. But with so much technology, some inconveniences also come because of the chip stops working or is not well coded with the car model in question, and it will not start. The same happens in case of loss of the key.

It was believed that when it became necessary to make a copy or make a change of key for car keys, the only one who had the codes for each vehicle was the manufacturer of the same. In this way, performing any of these procedures became a much more complicated and expensive task than it really is.

However, this belief was left without a base because there are sites where the key changes are made for car keys. Identical copies of any type are manufactured for almost all vehicle brands, with its chip included and also without adversely alter the car’s computer.

There are special tools, which are not used solely and exclusively at dealerships, which “allow you to program blank chips according to the codes of each car through the PIN or the reading of the car computer with an appropriate interface, which communicates internally without the operator having access to information for the security of the vehicle owner.”

To duplicate or make a key change for car keys and Transponder Car Keys, locksmiths use specialized machines. These generate the code of the key chip by connecting to the car in case the owner does not own the other key.

Thus, when the transponder is encrypted or when it is dynamic (it changes automatically when the car is switched off, and the key is removed), and they also duplicate. The transponder code on the keys without connecting to the car in cases where the owner has another key, and the chip is fixed (does not change).

The keys with anti-theft chip began to be introduced by the leading car manufacturers at the end of the 90s, and this system works with a controller called immobilizer, which interacts with the anti-theft chip that is in the head of the key.

To prevent or allow the flow of fuel through the gasoline pump, this system has evolved through every change of generation in cars.

Simply an incoming signal, emitted by a reading antenna: ring around the drum of the starter lock, and which is connected to the central computer. And a tiny antenna that holds the chip captures the signals, which is enough to generate power for said component, to emit its information in this way.

Transponder Car Keys equal to those of the original key can be activated or programmed using specialized equipment; Although today many cloning machines on the market can make copies of these types of transponders.

We offer discounts for Military, Students and Seniors